Jay asked me to spend the the first day of school on-site, in case the sudden change was too much of a shock for any of the children.

I camped in a workroom one wall from Melody and Elisha’s 1st & 2nd (combined) class and heard their first interactions with their teacher (Elisha’s spontaneous and musical, Melody’s called-on, but confident). The teacher kept going no matter what, continued her lesson without hiccup, and I began to realize how very different this rhythm was than anything I could do.

Before the end of the morning I was pretty agitated, actually. The hum and energy and metronome-steady press so close to me was nearly overwhelming.

I went into their classroom at lunch, and read to Melody after she finished eating.

She’d seen an illustrated version of Heidi in the book basket, one she remembered reading at home, and asked for it. For the next few minutes she lay in my arms and just soaked up Mama. While the rest of the class thrummed by their desks waiting to be released to recess.

The next morning (and every morning the rest of the week) Melody made it clear she was not interested in going away to school anymore, but we emphasized this was not a decision she got to make.

At the same time, I understood.  The clip and the rhythm and the push of an experienced teacher is very different that what any of us are used to, and it was nothing that I would be comfortable with myself.  I wrestled briefly with whether I could make my kids do something I wouldn’t do myself.

My conclusion was two-fold:

END_OF_DOCUMENT_TOKEN_TO_BE_REPLACED

So it just took asserting how much I planned to blog (both here and at Untangling Tales) for life to expand and fill all writing time.

So let me just give a quick two week update, since a slow one would take two hours.

Jay was gone for one of the last two weeks. While he was gone:

On the upside the freezer-death happened right before the weekend my mom had offered to keep the kids, so my marathon work sessions didn’t have to fit around the needs of the kids. I just didn’t have the time/brain cells to do as much novel work as I’d hoped to accomplish.

Cream (the white faced doe kid) was close to skin and bones and she came back with a few days of focused care, but Friday night (two days after Jay got home) her twin, Sugar, died. It wasn’t really expected, since Cream had looked so much worse than her sister and recovered.

So now we’re left with the question of whether to get a second goat (because all the writing talks about how goats don’t do well alone), or to sell Cream so she’s not living as an only-goat.

We’d rather keep Cream, it’s the second goat that’s tricky.  The kids- all 4- and I went to see a Nigerian doe today, but “Molly” was much too rough and aggressive with Cream, so we had to pass. (Made me *so* grateful we’d brought Cream and knew before we brought a new goat home that they weren’t compatible.)

The snow is almost completely melted here, Jay’s moat is doing it’s job just as it should, and we’re beginning to simplify our life here in other ways.

I’ve been looking at my choices and thinking about how much of what I do is externally motivated and how much intrinsically motivated.  I realized I was doing too much just because it was “sensible” and “could pay off later,” but that preparation was reducing my margin now, and margin is what I need, more than I need (say) rabbits that people might pay more for later.

In this case I’m referring to showing and keeping records.  The level of detail and engagement required to do them well eliminates my breathing room for things that matter more to me: like reading and meal planning.

Yeah. Reading and meal-planning matter more to me than a “potential” side business– especially considering the low level of payoff that looks to be available.

Anyway, we decided we’re not interested in stretching beyond what our family needs/is using, so we’re in the process of selling off extra/older rabbits.  We just finished selling all the mixed-breed chickens, today, so in a couple of weeks if we still have hens that want to go broody we should be able to let them and still end up with consistent layers.

We still want the eggs (since store-bought make me ill), and the “ethical” meat, but I’m sick of how much I’ve been trying to manage.

Along those same lines, I don’t anticipate a garden to be in our plans for this summer.  If it happens it happens, but I think for now we’ll just work at stabilizing our ballance. Once we find it.

(I’ve got other projects/ideas percolating– primarily having to do with food– and that’s where I want to spend “extra” energies.)

No promises any more. I’ll give what I can, and no more.  There will always be more to teach and learn than I can be a part of, and accepting that is part of accepting reality.

Admittedly, hard for me, but I’m learning.

We could have had a barn-fire today.

By the grace of God we became aware of the danger before it actualized. 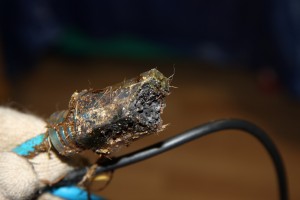 I’m still a little shaken, imagining what could have happened and how (whether!) I could have saved the animals had a fire actually occurred.

So very very thankful it ended so small.