I outlined my basic observation of differences here.

Another angle is that by doing things differently we begin to measure personal success in terms of success of the model we employ.

For example some parents (usually of only one child), directly attribute their child’s good behavior to their exceptional parenting skills.

This could be accurate, or it could be self-delusion.  I tend to take their gushing advice with a grain of salt, wary of such a small sample size.

Just yesterday I was talking with another mom about homeschooling and we were comparing methods (not competing, just finding out. She’s literature-based; I do half our subjects with workbooks and the other half orally).  I felt a warm, cozy comfort at our easy conversation, how we both tied our choices to our personalities and lifestyles, rather than the inherint *rightness* of the method itself.

I said so to her, saying how thankful I am to have several years “this way” behind me now, so I can compare a  track long-enough to let me see both when and how my method really works and when it doesn’t.  But how, over all, it averages out as effective.

My biggest discomfort in these “differences” interactions (whether it’s about parenting or schooling) is when someone attributes to the method what could just as easily be individual variation.  For “failures” or “successes.”

Natasha was reading by age five.  Melody, in the same environment, was still slogging through her phonics workbook at age six.  Some people asked if we were doing the right thing. If we were using the right curriculum.  And I did compare it to some other options, but felt nothing offered more than what we were using already.

Now seven, and nearly finished with those questioned phonics workbooks, Melody has a *solid* foundation that she builds on every day.  She has developed independent study skills, problem-solving skills (we’re still working on focus and speed, but we’ve got time), and I couldn’t be more pleased with the progress she’s made.

There is so much individual variation between children that I really think once you have something solid (by any objective standard you can measure), as long as it’s not actually making life more complicated (we had one of those, too), it’s a matter of persevering.

Elisha has begun the same series of workbooks– despite my intent to hold him back one more year– and I can already see that he, like Melody a year ago, isn’t quite clicking with it.

I haven’t decided if I’ll do an enforced hold until he’s older (my original plan) or keep working intensively with him.  One of the reasons I love the 50% workbooks approach is that it allows me to work independently too.

The books we use are so gradually advancing that the kids can frequently “self teach,” which is really important to me.  Not because I want to keep them out of my hair (they wouldn’t be homeschooled if that was important to me), but because I se my life as been one long string of self-teaching.

I consider it one of the most-valuable life skills they can learn, so I’m thankful to have found texts that reenforce this value of mine.

One of the reasons studying personality has been so important to me is how it allows me incorporate that understanding of equality into interactions where differences could start to look like mistakes. Like someone “getting it wrong.”

What I want to remember, what I want to extend grace over, is that correct can be a lot-broader of a path than I choose to walk myself.

So now I’m trying another layer of cooking-challenge.

Not to make my life more complicated.  Please don’t even joke about that.

I have reason to believe it will improve my health.  So I’m making trial of it.

Back a year and a half ago, when I dove into GF cooking in earnest, I was told to cut dairy as well, but both beginnings was to much of a burden. Now that I’ve (somewhat) mastered cooking gluten free, I feel I have the margin to add dairy free.

My blog-hunt has been for recipes that avoid milk without going “all the way” vegan by cutting all the eggs, which we have a bunch of and I want to include.

Here’s what I’ve got so far

I’ve referenced M-B a load of times in conversations since March, and figured it was worth while to take a moment to say why. As well as update those who’ve fallen through the cracks.

That is to say, anyone who’s missed out on my jiffy-summaries in real life.

To begin with, I really like what Camile had to say about this being a valuable exercise. It’s not just splitting hairs and certainly not setting up a hierarchy.

But I have one huge reason why I love the framing power of the Myers-Briggs Type Indicator (MBTI).

It is a vocabulary.

Language is the best way ever discovered of imposing order on reality.  And by having this vocabulary (especially when having it as a shared vocabulary) people can save so. much. time– and emotional angst– that can be better spent on real things, rather than misunderstandings.

END_OF_DOCUMENT_TOKEN_TO_BE_REPLACED

This is one of my *favorite* meals.

It makes both a nice white chili that you can “fancy up” with any veggies (I like to mix in yellow tomatoes and yellow peppers) or dairy (sour cream, cheese) you want to add, and I’ll also use it for “instant” taco salad, pouring a cup over a bowl of greens and corn chips.

I swear the kids will learn to eat it someday, just on continual exposure.

I make this “huge” in my 8-quart pot. Starting out you might be more comfortable cutting this in half.

Saute chicken, onion and garlic till chicken is cooked and onion is soft (if using chicken thighs the existing fat is enough, otherwise you’ll need to add a tablespoon of butter or olive oil to saute in).

Remove from heat. Mix in 1-2 cups sour cream (or plain yogurt) if desired.

Two nights ago we had one of those moments that, as parents, you wonder if they’ll ever come.

On Monday night all three children ate rabbit for dinner. Two of them requested more quinoa, and the one who refused quinoa ate double helpings of the spinach/pear/feta salad.

For dessert they all ate double helpings of spice-cake muffins sprinkled with powdered sugar, requesting the leftovers for breakfast; and those were held together with broccoli and carrot purees.

This came after a pancake victory last week where a buckwheat-heavy recipe was eagerly consumed and declared *delicious* by the entire family (when a year ago buckwheat was too strong for anybody but me).

It’s times like these when I feel a huge relief: we really are changing, growing, transforming our tastes and habits.

We may be slow, but persistence really seems to mean something in real life.

We were at a birthday party this afternoon, where I ate some of everything, which resulted in my throat closing up a bit (I don’t know what over; it was all good food), and my voice getting softer/more strained.

All that to say you’ll probably have to jack the volume.

I think this time of year is the hardest for me.

I’ll have to double check this at -40°, and sometime between January and February, when I’ve been out of the sun for my longest stretch.

I’m speaking of these weeks surrounding the solid freeze-up. At no other time of year is 35-40 degrees F so cold.  In February it’s outright balmy, I don’t want a coat, and can never understand why my teeth start chattering when I’ve been outside too long.

Water freezes over night, so I have to judge whether to give critters water in cold bowls, or wait til the water thaws in the afternoon.

Until the afternoon doesn’t get warm enough to thaw the water.

Thursday’s high is supposed to be 35, which means manually watering the outdoor animals twice a day, to make sure they get enough.

Jay’s been building a small barn inside the big shed that’s behind our home.  I’ve been *so* impressed at how fast it’s going up, and thankful that in (probably) less than a week we’ll be bringing all our rabbits and chickens in “out of the cold.”

But building in the cold has its own challenges, in addition to this is happening around the edges of his regular full-time job.  Which means most of what he’s doing is not only in the cold, but it’s only lit by his headlamp, because there’s no electricity in the shed.

The stress was palpable off of him tonight, as we passed after the kids’ bedtime on our respective projects.  “Is there anything I can do to make your life less stressful?” I asked, bracing myself in case he needed to say “eat all the animals,” just to get it off his chest.

And as I walked away I realized there was something I could do.  Basically I needed to switch into winter mode and just buckle down for the new season.  Because my attitude and the energy I approach my tasks with really make a difference in the energy-level of my house.

So I wore a hat tonight while feeding the rabbits. And my light leather gloves; enough for brief work requiring dexterity.

And I was quite comfortable, thanks for asking.  So now I think I’ve officially made my transition. 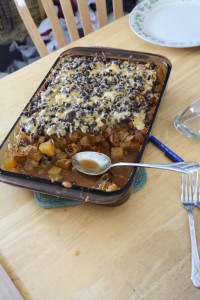 In a 3+ quart bowl blend oil and spices then add meat and potatoes, tossing to coat with flavor.

Pour into 9×13 baking dish. Sprinkle evenly with all the black beans, then cover with foil or a silpat.

Cook 30-35 minutes covered, then remove the dish from the oven and the cover from the dish.

Add the cheese and return the dish, uncovered, to the oven at least 3-5 minutes, melting the cheese.

I prefer to leave it 10 minutes. The beans and cheese are toasted and I really enjoy the texture.

For 10 servings (a stripe down the middle, each half into five chunks)  each serving costs 240 calories or 6 Points-Plus points.

With the shredded chicken (or moose, in my case) points go up to 8 per serving or 336 calories.

This pairs very nicely with steamed broccoli and cauliflower, and and the meal sticks with you like, well, meat and potatoes.

I’ve noticed that some people seem afraid of (caloricly) high-cost food (POTATOES! CARBS! Run Away!), but what I’ve learned is whole foods like these provide longer-lasting energy, and since I don’t need snacks between meals, my points/calorie use is no higher: as long as I’m only eating to need.