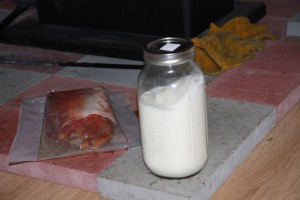 But most foods we eat on a regular basis are either based on gluten-containing foods (spaghetti and meatballs), made from recipes that have gluten-containing ingredients (cream-of mushroom soup in green bean casserole) or both (Soft tacos: the shells are made with wheat, and most taco seasoning contains flour as a thickener).

Eventually I hope you make peace with your kitchen and discover the joy of learning new recipes, but I understand that can be too much to ask for  in the  beginning.

At this point in your journey the most manageable thing may be learning how to make your familiar recipes without gluten.

Here are a few ideas that may help with that.

You already know about using rice noodles in your once-familiar pasta dishes (and you probably have begun reducing the amount of pasta you eat as a result.)

This is a generally good thing (“formed” grain products tend to be the least healthy types), but the familiar still provides a valuable service in our journey toward greater confidence in this new life.

Another alternative to gluten or rice noodles is the quinoa (pronounced KEEN-wah) blend noodles.  I don’t do noodles as much any more, but the quinoa variety seems to have a longer palatability than the straight rice.  That is, I have to get my rice-noodle casseroles *just* the right size (for the number of eaters) because even if the original meal tastes good (which it does), the noodles don’t reheat well.

I suspect this has to do with microwave heating, which is what we do with casserole left-overs.  The noodles would probably resurrect better if reheated in hot water.  So if you make too much spaghetti, save the noodles separately and reheat by boiling again till you like the constancy.

Not every stopgap or remake requires the sacrifice that GF pasta does. In fact, most of these are simple reverse-engineering to what was normal before “convenience” foods like Campbell’s Cream of Mushroom Soup.

An added bonus (Have you ever noticed that’s a redundant phrase?) is that the replacement generally tastes better because you’re using real food to make it.

Here are my most-frequent replacements.

There are fresher and potentially more nutritious ways to do these things, but this is good enough for me. Their the purpose is convenience.  I don’t get many shortcuts anymore, so I’ll take what I can.

Cream-of Base (replaces all Campbell’s-type soups, frequently called for in casserole recipes.  If you really want the wilty veggie chunks to mix in I’m sure you can come up with those from the back of your crisper.) This  recipe does the  job of two cans.

Mix dry ingredients together while melting butter in small saucepan. Stir seasoning blend into liquid butter then add broth and allow to simmer down thicker than you like it.  Remove from heat and stir in milk.

Modified from Stephanie’s Sloppy Joes recipe. If you  enjoy the flavor, ths seasoning can be used for slightly sweet homemade spaghetti sauce.

3 Tablespoons maple syrup (or other sweetener. I try to avoid cane sugar.)

My take on Stephanie’s recipe is to double it with a pound of beans for the second pound of meat and serve it over shredded cabbage– naturally GF, doncha know. (It sound weird, but necessity proved it works surprisingly well. And you work more veggies into your day.)

This recipe flavors a double portion of her recipe and fills a 4-quart slow-cooker to the brim (which, technically, you’re not supposed to do). Try it in a bigger pot the first time if it’ll make you more comfortable.

I use 2 Tablespoons mix with 1 pound meat, 1 pound cooked beans and salt to taste. I use up to a teaspoon of salt per Tablespoon of mix.

After browning the meat I stir in the mix and let the spices toast a bit (like Amy suggests).  Once the spices start sticking enough to make me nervous, I add a bit of water at a time till the bottom of the pan doesn’t look like burning anymore and everything stirs together.

If you like a thicker meat mix, stir 1 -2 Tablespoons of starch (tapioca starch, corn starch, arrowroot) into your first 1/4 cup of water before adding to the meat mixture.

I use this mix to season my Potato Bake and sometimes for a chili if I’m in a hurry.

With this taco seasoning I flavor “normal” tacos (just use the hard corn-shells you checked to verify were GF), chicken tacos, taco salad, tomato sauce.  Basically, all the stuff I used it for before.  This is what I mean by a stop-gap.  Once you remove your single offensive ingredient (gluten-containing taco seasoning mix), you can do what you’re used to doing. Everything else is naturally GF and family gatherings are a snap again.

What? You didn’t have an enormous taco salad at EVERY family gathering without a holiday? You don’t know what you’re missing. I’ll have to add that to the recipe list I’m compiling.

Ranch Dressing Mix (Based on the version Trina Holden shared in her very practical ebook Real {Fast} Food. It’s not trying to be a GF cookbook, but in its emphasis on maximizing nutrition while trying to fit it into a real life gave me some good ideas for how to go about my specifically GF efforts of the same thing. This is the book that gave me the foundation for monthly meal-planning.)

Ranch dressing/mix may not have gluten in it (I haven’t checked recently) but most mixes and bottles have other (and grosser) ingredients, so I use this instead.

Blend and store in an airtight container. 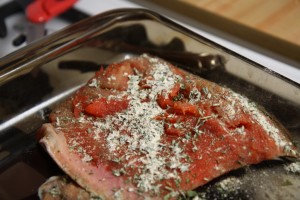 Trina recommends 2 heaping teaspoons per cup of buttermilk for a salad dressing, or pint (two cups) of sour cream.

It’s also good for a general meat flavoring: I use it on salmon fillets, when I think of it. 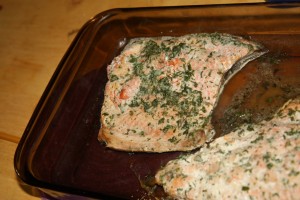 But I’ll tell you the real reason I make this mix:

I have cheated on my GF mission more for pizza than for any other thing. And Papa Murphy’s Garlic-Chicken-Tomato-White-Sauce (etc.) was the most frequent enticement.

And now I make my own GF version at home at least twice a month.  So. good.

And this is the sauce.

Combine 2 Tablespoons of ranch dressing mix with 2/3 cup yogurt or sour cream and 1/3 cup milk (or to your preferred consistency/intensity). Spread on your crust as usual and cover with you favorite toppings.

To recreate my favorite pizza I thin-slice a broiled/seasoned chicken thigh, dice tomatoes, green onions, and usually colored sweet peppers too.  I arrange all that on top of the sauce and cheese then sprinkle with granulated garlic.

(For you more traditional folks, here’s a simple-but-satisfying version that comes together quickly.)

Mix tomato stuffs together until smooth then add seasonings.

By weight I combine

I sprinkle this mix on the egg patty for egg sandwiches, scrambled eggs, and roasted chicken thighs.

RCTs are good enough to eat straight out of the oven, but if you’re trying to economize it’s best to freeze them individually– right now we accomplish that by setting them in a single layer on a cutting board on the porch– Then I’ll thaw and chop them as needed for salads or pizza toppings.