If you learned you needed to drop gluten, chances are you froze.

You are a capable, resourceful person and have mastered many challenges in your not-too-long life. And there’s a part of your mind saying No big deal. We can do this.

Then there’s the other part.

The tired part that probably is the reason you even considered taking on this extra burden (and it is a burden) of learning-under-pressure.

When I began, I felt like I was one ripple from drowning (of course, that was about the same time I discovered depression), but that’s all I’ll say about that for now.

At this minute everything seems huge and you just want something to feel normal. 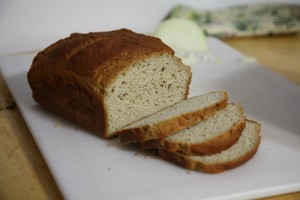 Well, as long as you don’t expect it to be *the same* I do want to offer you a recipe that will at least give you something useable to replace sandwich bread in your life. Then you might be able to feel a little more normal. If you’re a sandwich family.

Just make sure the fillings you choose are gluten free. Some sandwich meats have gluten-laced “natural flavors” added, so check your labels!

This is the way I make Amy Green’s Perfect Bread, once or twice a week.

You put it together like quick bread too. (I’ll explain the new ingredients at the end.)

And, yes, you really do need to measure like this.  You will have a much higher success rate from go if you use recipes developed and conveyed in weights.

Once you get the feel of GF baking you’ll be able to play more and with more variables if you are solid in your weights and ratios.

In your stand mixer (if you have one) combine

Stir the dry into the wet and scrape down the sides.  Once you’re sure nothing will escape, turn mixer to high for 1-minute.

Just as you would have done something like this to “develop the gluten” in wheat bread, this “activates the xanthan gum.”  Esentially, it adds to the body and springyness of the loaf.

If you’ve ever had supermarket GF bread you know how needed that is.

After a minute of mixing, stop the machine and add

Then mix on high for another two minutes.

Line two 9×5 bread pans with parchment paper (you’ll be able to reuse it– and the next time around the paper will be molded, so it’ll be much easier), and zero the scale with one prepared pan on it.

Pour in dough until the scale says 1lb, 13oz. (or thereabouts). Repeat for the other pan.

With wet fingers or the back of a wet spoon, shape the dough into a traditional loaf shape, then set in a warm place and cover with plastic.

When the top of the loaves are about even with the rim of the pan, set oven to 350°

When oven is at temperature cut slashes in the top of the loves (optional) and place the pans in the oven (not optional).

Cook 45-55 minutes, turning half way if your oven necessitates it.

And you’ll get used to what it looks like, too.

GF bread is a finicky animal: you get it to show up with the right weights, measurements and ratios, but if you don’t finish well it could end up looking like one of the starving cows from Pharaoh’s dream. It “ate” everything, but can still end up looking emaciated.

If that happens (and it hasn’t happened to me yet with this progression) don’t quit.  All the details get easier after the first batch.

We use this for sandwiches (egg, PB&J, grilled cheese) and after a day or two, if it lasts that long, finish it off with french toast.

I do freeze the second loaf the same day I make it (once it’s cooled).  Like all GF bread it dries out crazy-fast, so making a batch when you have plans to use it will result in the most enjoyment.

¹ I use ~50/50 of both my blends, since they’re already mixed up and I’m just pulling scoops as I go.  Be aware that these are all new and unfamiliar flavors to begin with. One of the posts in my head includes a sort of chart with mild- to strong-flavored grains ranged along a spectrum.

Rice will probably be the least distracting flavor to begin with, but unless you can get a hold of “superfine” grind, the texture will be gritty, and not like the soft bread you’re looking for.

Millet and sorghum are the next mildest. You might try a blend of those with your 30% starches and see how that works for you.  Almond meal is another option (for a familiar flavor) in the 70/30 mix.

² It’s in the GF aisle and expensive. Yes, you need it in the beginning. There are alternatives, but you’ll know better how to judge them if you start here.  Consider this version zero on your variabilities chart.

³ Three teaspoons (one tablespoon)would probably be fine, too, but I wouldn’t go less.  I’m sort-of afraid of the taste of salt in my bread, so I’ve stuck with this since it works for me.  Salt is necessary for a good flavor; it’s easy for bread to get bland.