So life doesn’t slow down just because I’m doing things besides writing. 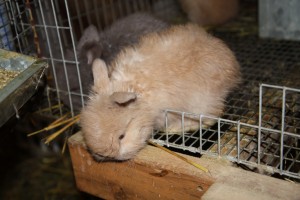 A) Jay and I downloaded the first movie/episode of Sherlock last month and ordered the whole first season from B&N soon after.  But it took nearly 3 weeks to arrive.

B) This week I’ve been a bit sick– nothing completely miserable, but enough to make most “efforts” quite draining.  Even so, we’ve had a few projects to manage, including a few trips to town for the making of Easter outfits and supplies for them. We haven’t done homemade dresses for the girls before, and I’m excited, hoping they’ll be able to be involved quite a bit.

C) The real news (on the “homestead” front) is record-setting snowfall.  I’m sure we passed or at least reached the 14″ max forecasted for the 48-hours of heavy snowing.

I kept moving right, thinking they just overshot their lane a bit, and ended up all the way on the sidewalk (the 12″ berm of fresh snow made for a couldn’t-be-better surfing out of the way) and the momentum that got us up got us enough of the way back down that we had traction to return to the road.

D) On top of this I’ve been working (actively) on my novel again, which fills my evening computer time.

Or to say more accurately, I worked through some discoveries I made, and have now reached the place where I have to knuckle down and make it keep happening, because that’s the stage I’m at: everything that will “finish itself” has been done.

In other (more?) important news, Elisha is reading now.  He’s got the sounding-out concept well, and while he still guesses as much as anything, he’s made that leap of one-to-one correlation and the confidence that he has the necessary tools to decode what’s in front of him. Most of the time.

What I enjoy most is Melody’s chance now to coach her brother the way Natasha has coached her– sitting alongside and sharing a story together.

And I’m also glad to see the children voluntarily playing outside more. The snow is too deep for the goats, so I don’t make them go outside now, but the girls in particular are enjoying the “new growth” and Melody tells me how much she likes to go “swimming.”