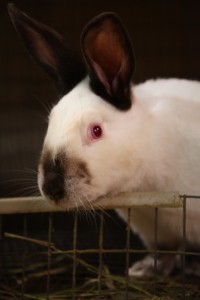 This is Mneme.  She is 6 months old and having her first litter Friday.

(That’s one of my favorite thing about rabbits so far: their due-dates are so much more predictable than humans’)

The three Muses (so named because all of their line have “mythic” names and came from one breeder, as opposed to the B-rabbits, whose names, originally enough, all begin with B) were housed in a single cage until they reached breeding age.  We culled a few cages to empty, split out the girls and bred them that same day.  Or tried to. We bred all three of “The Muses” when we separated them, but only Mneme took.

This has been our learning curve: taking General Principles and filtering them through actual experience.

None of the trio seemed particularly interested.  Well, there was the one who wasn’t actually mean to the buck (Mneme), but the other two were not at all cooperative.

Come to find out, when does are housed together they will often get along fine but the subservient does will not accept the buck until they’ve been on their own for a while.

Sure enough, we rebred the “femiNazi” does a couple weeks after separating them, and they were all sweetness and light.

In May I bought the B-rabbits, a set of 5-week-old siblings. At the end of June we bought adult stock: three does and two bucks (for maybe-too-much money). Less than a week later one of the senior does broke her own back.

Yup. We walked out to the cages with the kids tugging great-grandma’s hand, eager to show her the first animals on our new hobby farm and… Hera was dragging her hindquarters.

I brought her back to the breeder to be sure (internet sources blame bacterial sources for similar symptoms), but there was nothing to be done and Hera was dinner the next night.

The breeder was very gracious and sent me home with a doe kit, just because she had an extra. Made me feel better about what we’d spent.

Turns out meat buns have a high risk of broken bones.  They have been selectively bred for generations to have a lot of meat (muscle) and less bone.  This so that the feed will go to building meat rather than bone.

One statistic I heard– I hope to test this for myself– is that a dressed rabbit carcass yields 97% of its weight in meat.  I know for chicken the number is only 50%.

Rabbits can easily break their own backs.  When you have that much muscle hinged on bones this fine, all they need is to have their front end immobilized as their back end exercises those great muscles, and snap goes the back.  Jay thinks the fox haunting our place last summer might have passed by, freaking her out enough for the back-breaking calisthenics.

Kinda makes you ready to be extra-careful in the way you carry those little bundles of muscle.

This means they will dug a nest, pull hair, and feed the babies in their nest, but they’re not going to make sure those babies get into the nest in the first place.  Baby rabbits have a rooting-esque reflex that urges them to crawl down and/or to warmth.

But this is only useful if they are strong enough to crawl and warm enough to stay alive to do so.

Our second breeding, due in September, was a tremendous success and failure.

Europa had eight perfectly formed little kits.  I found them at morning feeding, cold and stiff on top of the hay in the nesting box.

In Freya’s box I saw two on top of the hay.  Inside there were two more.  I was afraid they were dead too, at first, but then I felt a butterfly’s kiss of movement.

We brought them all in by the wood stove, but only those two at the bottom of Freya’s nest survived. Ten out of twelve lost.  One survivor we kept for our second herd buck.

What we learned from this loss was to check frequently on due-day.

I wish we didn’t have any more painful lessons to learn, but I already expect we will have a big one at the end of this summer: culling named stock.

It’s not something I look forward to, and I know breeders are warned not to name stock animals, but I need words to understand and order things.  So I’m already bracing myself.

And maybe I’ll know after this fall if naming is worth the cost.