It’s not the Rules That Are the Problem

You don’t have to see these two romantically paired to see the sweetness of this video.

August 19: I found her observation about “nonchalance” fabulous.

[Article:] Why Women Can’t Have it All

August 20 near Stuart Park, Australia
Amy Jane Helmericks has written a brilliant article (again) for Wyn this week: Sadness– Grieving Through Fiction.
August 21:
Wired and excited.
Just sent a round of requests for “short order” recommendation letters. I was handed a deadline last night.I’m participating in the Fairbanks Arts Association Artists-in-Schools class/training.

There’s an appropriate number of hoops to jump through before I can be hired by a school, but if I get all my boxes checked by the end of the month I could have my offerings (storytelling and noveling– two different workshops) in the current school-year’s “catalog.”

Soooo if you’re the parent of a student 5th-grade and older, and your child is interested in (and/or needs help with) public speaking or structuring stories, you could mention my name…

August 26:
So, I know I should encourage Melody to go back and actually follow the directions…But I kinda like this version.

August 26:
Two lovely, encouraging letters of reference turned in.I’m growing convinced these should be a regular part of relationships.
August 27:
Soooo…
Elisha kinda-almost got hit by a car yesterday.The horror of it is just sorta growing on me, and I’m still in awe of the perfection of his escape.

A driver turning right looked to the left before pulling into traffic, and connected with Elisha.

The girls were already past and didn’t see a thing, my mom was bringing up the tail of the train and shouted STOP! at the driver. Poor Elisha thought she was shouting at him (“I put on my brakes but they didn’t work!”) before he ran into the car.

That was the version I understood when I showed up to give the official, “He’s fine, Ambulance, you can go” signature. And he really was: no scrapes or anything from falling off his bike (and the woman was someone whose name I knew from some interaction in the past. Looking shook up herself, and like she expected to be chewed out). They took his vitals, agreed they were fine, took my signature and left.

The State Trooper took statements from my mom, the driver and the taxi driver who saw it all and called 911.

Thing was, when we got back down the road to my folks’ house, I saw the bike. It was damaged and not in a cute, boy-ran-into-a-car way. The chain-guard and the fork of the back wheel had pinched the back tire, and the side of the bike seat was scraped through the cover.

“*What* happened again?!” I asked, starting to wonder if I should be traumatized.
Elisha did fall off his bike, and then the bike had a car vs. vehicle incident.

The driver was at fault, but, ultimately, no one was hurt.
Makes me glad I didn’t know when I was face-to-face with her, because I don’t know if I would have wigged out on her. 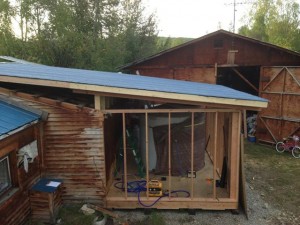 August 29:
Ultimate homeschooling threat: “Next ‘reminder’ [to stay focused on your work while sitting on the couch] will put you at the table!”
August 30:
I’ve been making my GF pancakes with pumpkin lately (“punkin pie” pancakes), to add variety to their nutritional profile. This morning Elisha asked if I’d made “puncakes” again.I hope it sticks.

The joke/entertaining (not-really) part: I just learned about it last night, at my last Artists-in-Schools class. I stayed up till 2+ in the morning pulling pieces together, homeschooled my kids today (Thank God for my new Homeschool Helper app that I assembled two days ago) and finished compiling/proofreading writing samples tonight.

Sent a chapter from my novel, a short folktale I tell, two blogposts and two Wyn articles. (They say you can have “up to” 20 pages. So I took them all.)

The end was that I didn’t get it, but it was good practice, anyway 😉