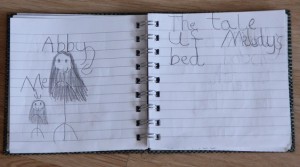 “The tale of Melody’s bed.” 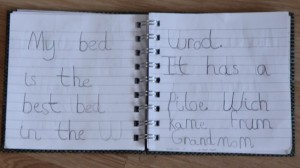 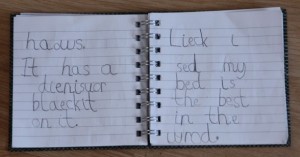 She read it aloud to me, which helped me translate it for you. This is the longest stint of voluntary writing she has yet done, and she was very pleased with it.

Her face and body language as she shared it reminded me irresistibly of a puppy, tail like a propeller, nearly jumping our of her skin with joy.

BTW, this is what school looks like at my house. When I’m not there with them (say, reading aloud) they have their set of workbooks they plow through. 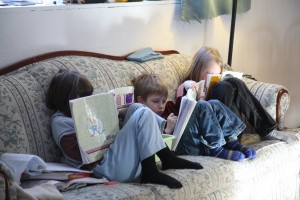 I’ve been very thankful for how motivated they are by workbooks: being able to say they’ve done X# of pages, or that they’re this close to the end of a chapter spurs them on better than any of my praise or requirements.

And it seems to help, too, when they have similar subjects.  I can be frustrated by their attention to fairness, but it creates a mellow endurance for work they’re not interested in, and I am thankful for that.

Yesterday, for Jay’s birthday, he took they day off and flew our family to Tok in his mom’s 172 (it lives at the Fairbanks airport and is the plane Jay used when he learned to fly). Once we landed back in Fairbanks Jay and I had a forehead-smack moment where we realized we hadn’t taken *any* pictures on the trip.

The most, erm, adventurous part of the trip was when we were still 30 minutes from landing in Tok and Melody let us know she *needed* to go. “I don’t think I can hold it!” she said after a couple increasingly urgent updates.

I was braced for a wet plane (“How bad can it be? I guess we’ll find out.”) when Jay thought of using her almost-empty water bottle and the “pee stick” we carry to simplify travel.

“Stand up,” Jay told her, fishing out the elements of his plan and passing them to me.

“But I’m buckled,” she answered in a tiny voice.

“Telling you to stand is giving you permission,” he explained, getting back to flying the plane.

So yet again (this is not the first time) we were very thankful for this nifty little invention that lets the girls skip squatting.

And I was very, very thankful we had the option, because (sorry for the TMI, but it caps the story:) she filled her water bottle and Jay had to empty a second one out the window so than hers wouldn’t overflow.

And we got a good story out of it anyway.

One thought on “Schooling (and a birthday trip TMI)”