We had a number of rabbit-events this last week.

On Wednesday Serena had her litter, a day later than I’d expected. 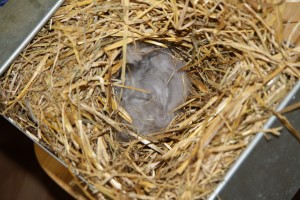 The absolute coolest part was that, since she was under my desk at the time, I heard someone squeak and was able to watch the end of the delivery. So cool.  And everyone seemed so much more vigorous than earlier litters, something I assume is due to the warmer introduction to the world.

She has got to be the messiest rabbit I own.  (I’m going to experiment with fostering one of her littles to a meat mama, once the babies are close to the same size: see if neatness is something kits can learn).

She uses the same nestbox she nurses in as a litter box.  Makes me nuts.  The babies are only a week old, I’ve changed out the box twice already and it’s messy again.

The worst part is that I’m destroying the warm part of the nest– angora wool woven into the straw– when I change it out.  So this time (I’ve moved them from the house back to the Rabbit Room) I’m keeping an eye on the mess, and as long as it’s not invading the kits’ space or looking goopy I’ll just leave it all alone till the kits are bigger and making more heat.

Two more does were due the same day as Serena, and enjoyed having the boxes, but never nested or delivered.

I still haven’t mastered palpating, nor “gone for it” very aggressively, so had another *SIGH* need-to-figure-that-out moment.

I was frustrated, sure, but I was trying to figure out how to cut back on my breeding stock, and after looking at my records (this was the third breeding that didn’t produce for each of them), I’m willing just to add them to the stew pot. One less decision to make later.

With two missed kindlings, I was nervous about the first-time mama due today, but Polly did fine. 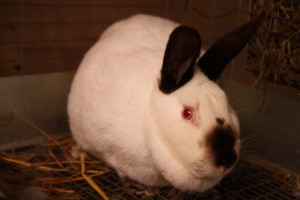 She seemed a little confused when I put the nesting box in with her yesterday, but on my third or fourth check today she had loose hair all over her cage and squirmies in the fur-lined core of her nestbox. 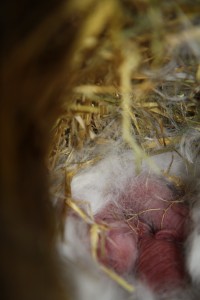 There were only four, but I’m fine with that, even though it’s a relatively small set. With my latest disappointments from careless  mamas (or weak babies), resulting in kitcicles, I’m grateful to have a promising mama whose instincts seem good.

She hasn’t fed them yet, and she still seems pretty stocky, so I’ve been up late re-checking her, and giving her spinach (high in calcium) to see if that will stimulate further uterine activity.  I don’t think I’ll be quite easy about this litter till I see round tummies.

At least they have a warm nest to wait in.

ETA: I gave her a wad of spinach (for the uterine-muscle strengthening calcium) and by morning she’d delivered three more (total of 7 kits), also in the nest and all fat & happy.

Polly is clearly what I consider a “keeper” mama.

I decided this week I’m ready to research what it would take to grow and/or mix our own rabbit feed.

Sure, rabbit might have the most-efficient feed conversion (or maybe it’s pounds produced per mama), that make it desirable for meat production, but in Alaska the price of rabbit feed is crazy-high.  I haven’t got a head for these details and I already know we’re in the very-expencive-even-for-a-hobby category.

Since I can’t see “the market” supporting what it takes to raise these guys in our current set-up I decided I need to just do. the. math.

How many kits would we would eat per week, times weeks in a year, divided by how many per litter.  Work out how many litters we’d need/year and decide how fast I’m wiling to breed back resulting in the answer to how many does I’d need to keep.

Main problem of course is the number of variables in all that.

And the other major rabbit-event for this week is Jay installed the Wringer hardware in the cabin tonight, but it was late enough we decided not to start anything until tomorrow.  We’ve butchered rabbits before, but not with this set-up, and we’ve not gotten very efficient yet.

And if I decide to anything visual (it won’t be in the near-future) I’ll be sure to put a *notice* at the top so there won’t be any unwelcome surprises.