Here is Natasha, sewing her cousin Brooke’s birthday present. She was so pleased to put the whole thing together herself. 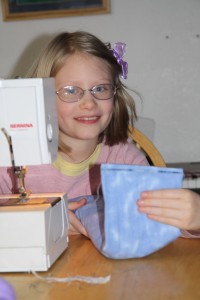 It’s called a “warmy” in our home, and the kids each got one for Christmas (a fun surprise, since they knew their cousins were getting one each, and I made a second set after they went to bed Christmas Eve). 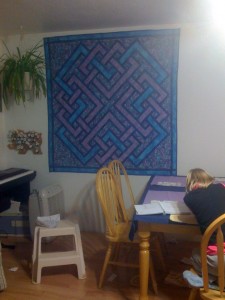 These next two are a couple of the pictures I wanted to include in this post.  They were the chosen ambiance for each room.

That’s the Elephant Thread-Holder you see to the left of the large quilt has a fun family story behind it.

My mom has a giraffe-shaped piece of wood full of finish-nails that holds her spools of thread in relative tidiness.

Early in my marriage I was very busy with quilting and sewing, and building up a healthy spool stash of my own.  I was the second child to leave the nest, and my parents began the long project of streamlining their household.

Behind the kitchen sink, all my growing-up years, as long as I could remember, there was an elephant-shaped cutting board.  My dad had made it of the bit of bathroom counter top he’d cut out years ago to put the sink in.

I knew it was old, and probably unsanitary and all that, but it was still hard to watch it disappear. Well, our second Christmas (I think it was) Jay hung out at my parents’ place more than usual, and surprised me with this thread board (with pretty matching dowels rather than nails) still slightly sticky with my favorite wood stain.

He had taken the blocky, familiar shape and recreated it as a memory-keeper that served a real and needed purpose.

And it was a total surprise. 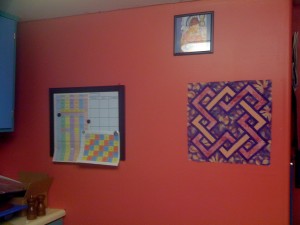 This is my kitchen wall (three weeks ago. Now the picture at the top has been changed, and the slogan,

has been added below the two bottom pieces.

It doesn’t have a clean/literal translation, but the meaning of the saying is “Strength in proportion to stretch.”  That is, think of a spring, or a bowstring.  The tighter it’s stretched the more force in contains.

I like how the words look, and use it as a reminder to let the tightness I feel focus my strength, rather than snap me. 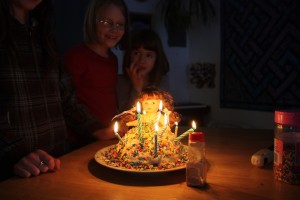 And here is Natasha’s birthday party on the 14th. We had another -30 party and a handful of dear friends who joined us to make the celebration complete.

Yeah, that’s a doll in the middle of those candles.

We used a dress-form pan and filled it only part way so it would be a little-girl cake. (I looked through a few stores before I found just the right little girl doll to use for the centerpiece.)

So there you are: the highlights of January. Oops.  Sans rabbits.  But Jay’s on the editing computer now, so I’ll have to do it some other time.

2 thoughts on “We have pictures!”